NHS medics must wear full protective equipment if they come within three feet of a coronavirus patient, the government warned today, as shortages of the gear saw a brave nurse forced to dress in just an apron and gloves.

Public Health England has issued stricter guidance on personal protective equipment (PPE), making it a requirement to wear a face mask, gloves, an apron and eye-protection as a shield against infectious airborne droplets.

A global shortage of the equipment medics and carers need to protect themselves against Covid-19 have led to shortfalls in the UK, with warnings the lives of thousands of NHS staff are being put at risk. 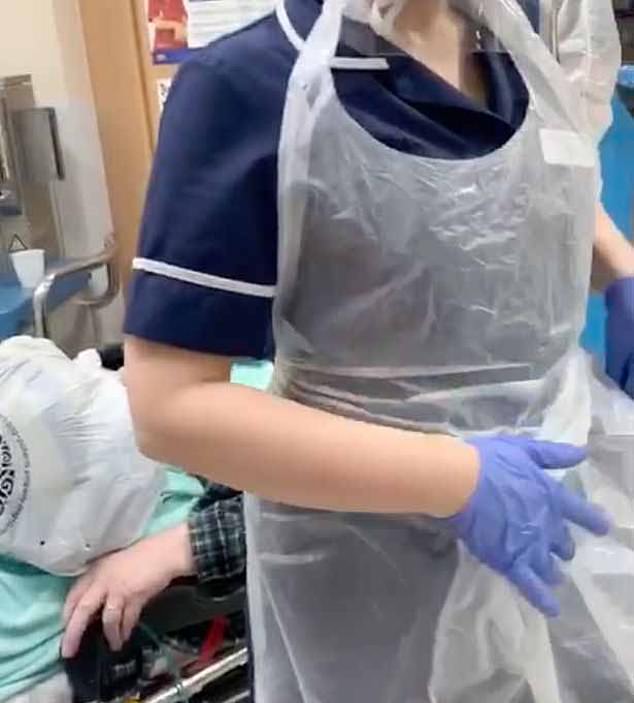 Nurse 2, with required protective equipment: A clinician is pictured wearing full protective kit, including a mask, gloves and a visor, at a coronavirus testing station

How the two pictures compare

Nurse 1 – She is seen only wearing an apron and gloves, putting her at risk of coming into contact with infectious airborne droplets from when a patient sneezes;

Nurse 2 – She has a face mask, a plastic visor to protect the eyes, as well as gloves and an apron.

He said: ‘Every single GP practice, dental practice and community pharmacy has had a PPE delivery.

‘All care homes, hospices, and home care providers have, or will shortly, receive a delivery.’

Medics today spoke of their concerns at not being adequately protected, as companies including the chemicals giant Ineos and beer producer Brewdog unveiled plans to mass manufacture hand gels for the NHS.

One obstetrician working in a hospital in London said protective gear is being kept under lock and key by senior staff.

Another doctor compared the situation to sending a soldier to war without the necessary equipment while a junior doctor said it feels like it is ‘inevitable’ that they will contract the virus due to a lack of PPE.

‘There is some, but now we’re in a situation where people are having to hide them and store them for their own staff,’ the obstetrician, who chose to speak anonymously, said. ‘Our bosses are having to store a certain number.

‘We are working in a hospital where there are key workers – including orderlies, porters, healthcare assistant – they have a right to be protected too.

‘Our orderly was walking around the ward yesterday with a sleep mask over her face – an eye mask over her nose and mouth as a make-shift mask. They’ve said she doesn’t need a mask because she’s not in contact with Covid patients but so many patients are asymptomatic. We should be managing patients as though everybody has it.’

She added: ‘There is not enough kit. PPE is locked away in our hospital and only one person has got the key because people are panicking. So, some people are going in and grabbing some of the stuff because they want to walk around with a mask.

‘What people are doing is they are hiding them because they don’t want just anyone grabbing the kit, so the bottom line is there is not enough kit.

‘[It is] out of sheer desperation, there is just not enough.’ 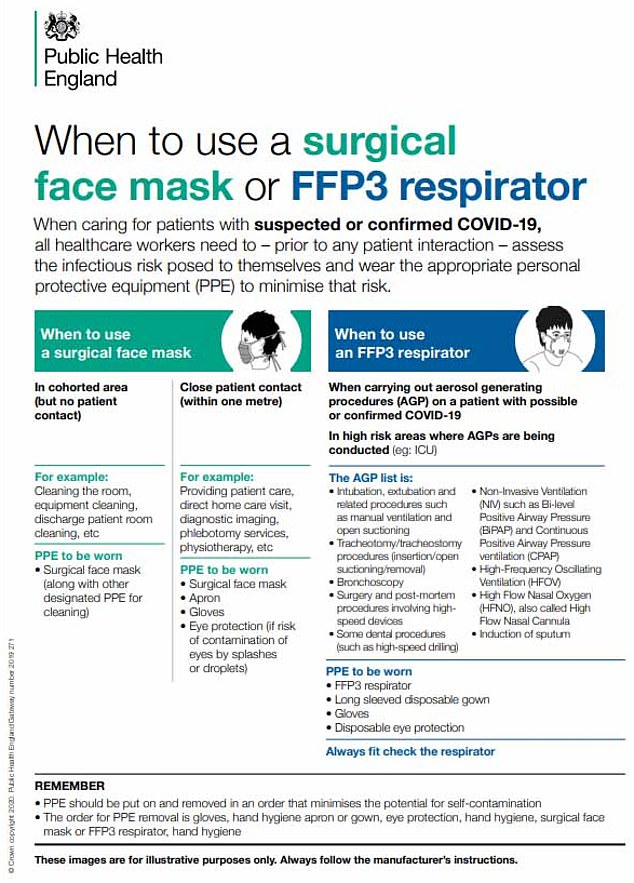 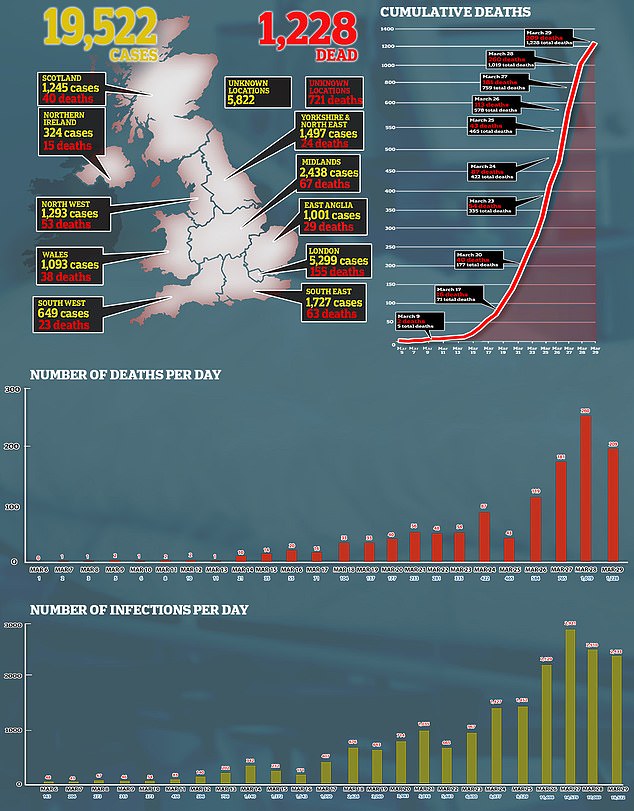 It is an outrage that there have been horrendous shortages, mistakes and confusion around PPE, for it risks destabilising the NHS effort to tackle the virus. A clinician is pictured wearing a mask and gloves at a coronavirus testing station

Another frontline NHS doctor, who also worked for the Government in west Africa during the Ebola crisis, said some fellow workers are saying they are sick as they fear the PPE provisions are inadequate.

‘All my colleagues are quite nervous – some people are going off sick because they don’t feel safe,’ the doctor, who asked to remain anonymous, said.

‘Others are seeking placement elsewhere so they are not frontline, again because of the lack of PPE.

Formula One engineers have helped develop a new breathing device for coronavirus patients.

The Mercedes team and academics at University College London took just four days to produce the first ‘continuous positive airway pressure’ (CPAP) device – 100 of which are now going into clinical trials at a hospital in north London.

The equipment – which pushes air and oxygen into a mask to inflate a patient’s lungs – is an alternative treatment for people too frail to undergo invasive ventilation procedures.

It has already been signed off as safe for medical use by the MHRA safety watchdog and should complete its clinical trial to prove it helps patients at University College London Hospital by the end of this week.

The technique has been widely used in Italy, where ventilators are in short supply.

Ventilator ‘rationing’ has also begun at one London hospital, with bosses ruling that only patients with a ‘reasonable chance of survival’ should be allowed them.

‘The closed WhatsApp groups are awash with fear, anger and confusion around the issues regarding PPE.’

A junior doctor at the Royal Bolton Hospital in Greater Manchester said PPE was the main concern for health workers.

He said: ‘I just think at the moment the main thing from a healthcare worker is our concerns about PPE.

‘You wouldn’t send a soldier out without the necessary equipment so why are healthcare professionals not being provided the adequate PPE?’

‘There is such a shortage, so we feel like it’s inevitable we’re going to get sick. Infection control tells you one thing, the government are advising another thing, there’s so much conflicting advice.’

The World Health Organisation has warned that the ‘chronic’ shortage of PPE is threatening ‘our collective ability to save lives’.

On Friday, WHO director general Dr Tedros Adhanom Ghebreyesus said: ‘When health workers are at risk, we’re all at risk.’

The Department of Health and Social Care said it has issued millions of pieces of equipment and set up a national helpline so those in need can ask for more.

It came as the actor James McAvoy has called on the public to help save lives by donating money to buy protective gear for NHS workers – as he pledged £250,000 to the cause himself.

He helped the Masks for NHS Heroes campaign smash through its £200,000 target just three days after going live.

The donations will buy masks, visors, gowns and gloves from global supply chains to be rushed to the UK by air freight.

Related posts:
30/03/2020 World News Comments Off on NHS medics 'must wear full PPE gear within 3ft of a corona patient'
Lifestyle News:
9am Man Utd news LIVE: Red Devils ‘close to agreeing £50m-plus transfer’, Ben Chilwell EXCLUSIVE, Jadon Sancho LATEST – The Sun
ASDA is selling full HD smart TVs at a low price you’ll find hard to believe
Juice WRLD’s ‘Legends Never Die’: Album Review
‘What Do We Need to Talk About?’: Theater Review
Recent Posts
This website uses cookies to improve your user experience and to provide you with advertisements that are relevant to your interests. By continuing to browse the site you are agreeing to our use of cookies.Ok