The origins of one of the most famous comedy TV catchphrases came from a surprising source — one of the writers of The Office heard it during his college days. When Michael Scott first uttered it, there was no turning back on employing it numerous times throughout the series. 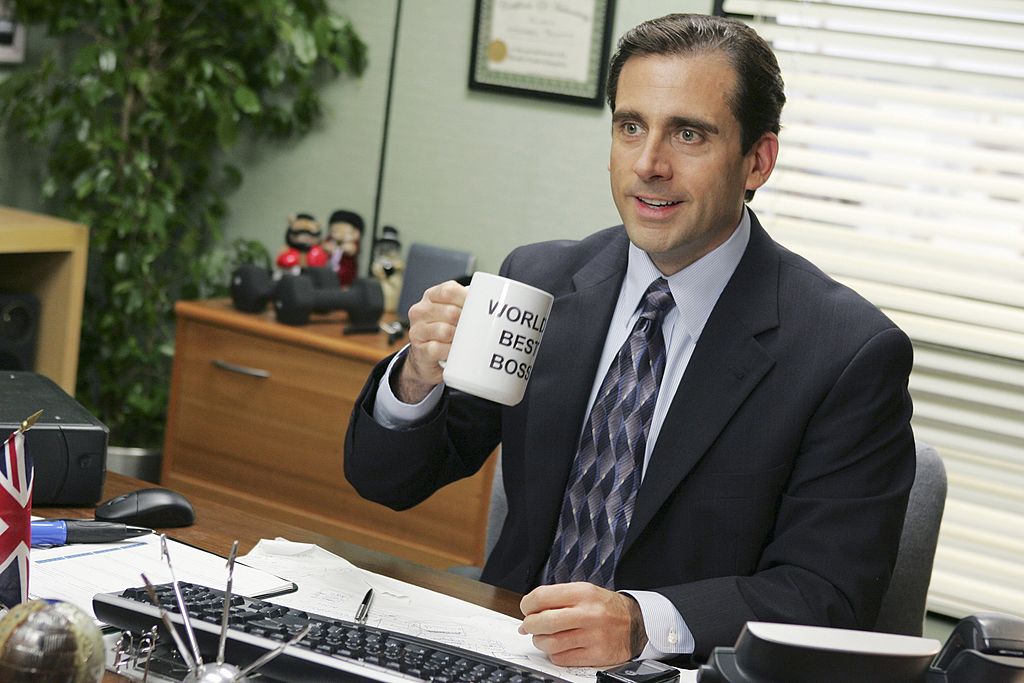 The first time Michael said ‘That’s what she said’

The phrase is first said in The Office Season 2 Episode 2, titled “Sexual Harassment,” in which Michael announces he’s no longer going to say “That’s what she said.” During the Dec. 10, 2019 episode of the Office Ladies podcast, Jenna Fischer and Angela Kinsey shared more details about the scene.

As he must be more professional in the workplace, Michael tells the office workers, “I just want you to know that, uh, this is not my decision, but from here on out, we can no longer be friends… and when we talk about things here, we may only discuss, um, work-associated things… and, uh, you can consider this my retirement from comedy.”

“And in the future, if I want to say something funny, or witty, or do an impression, I will no longer ever do any of those things,” he adds.

Jim asks, “Does that include ‘That’s what she said?’ and then teases Michael by saying, “Wow, that is really hard… You really think you can go all day long? Well, you always left me satisfied and smiling, so…”

Unable to resist the setup, Michael shouts, “That’s what she said!”

Fischer and Kinsey recalled how they remembered filming the scene, with Kinsey pointing out that when Michael blurts out “That’s what she said,” that “his laugh is so huge and giddy and contagious and he’s so happy and pleased with himself” that the cast almost started laughing.

Kinsey adds that “you catch it in John, for just a second” as he’s seen putting his hand in front of his face to cover his laugh.

RELATED: This Episode of ‘The Office’ Was So Cringey, NBC’s HR Used Clips in Their Training Videos to Show How Not to Behave

During the Office Ladies podcast, Fischer revealed that the origin of the catchphrase is courtesy of writer B.J. Novak hearing it while he was in college. Another phrase that B.J. heard in college was used in one of Jim’s talking head interview about how he dislikes Todd Packer. “What has two thumbs and hates Todd Packer,” he says, before pointing his thumbs toward himself to declare, “This guy!”

“That joke of ‘what has two thumbs and likes…’ and also the very famous line from this episode, ‘That’s what she said’ those are not original jokes,” Fischer explained. “We did not make those up, B.J. Novak did not write them… B.J. said those are things that he just heard in college as a college student and he kind of dusted them off and brought them back to this episode.”

“And then they took off, especially ‘that’s what she said,’” Fischer added.

The phrase had a ‘Saturday Night Live’ connection

Fischer also pointed out that the phrase “That’s what she said” was said by Chevy Chase on Saturday Night Live during a “Weekend Update” segment and it was said in Wayne’s World, too.

“The origin of that joke is a British joke,” the actress pointed out, but the phrase originally was “As the actress said to the bishop.”

The phrase lost popularity, but Ricky Gervais brought it back when he said it on the British version of The Office… and they brought its American equivalent to the U.S. version.

Related posts:
04/06/2020 TV and Movies Comments Off on 'The Office': Michael Scott's Famous 'That's What She Said' Joke Has a Connection to 'SNL'
Lifestyle News:
Please enjoy watching this beautiful fluffy cat getting a massage
Mum gets floors sparkling with homemade cleaner that cost just a few pounds
People reveal VERY awkward wrong number text exchanges .
ESPN’s Jay Williams slams NBA players for ‘tone-deaf’ bubble complaints
Recent Posts
This website uses cookies to improve your user experience and to provide you with advertisements that are relevant to your interests. By continuing to browse the site you are agreeing to our use of cookies.Ok