RALPH LEONARD: It’s crass and inflammatory to equate racism in America with the experience of being black and British

The horrific murder of George Floyd, a black man killed by the knee of Officer Derek Chauvin in Minneapolis, has not only shocked America, but enraged the world. Floyd is the latest addition to a gallery of victims of US police brutality, most of them men, most of them black: Eric Garner, Walter Scott, Tamir Rice, Philando Castile and Freddie Gray, to give a few examples. 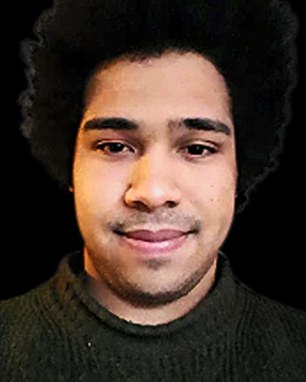 Floyd’s killing has a ‘this time it’s different’ feel only because the footage makes what happened clear and unequivocal: there is no wriggle room, no get-out clause, no slimy rationalisation to take refuge in.

This was no split-second decision made under pressure. Kneeling on a man’s neck for minutes on end, effectively putting him down like a stray dog on the street, is anything but that.

We have been forced to see the murder for what it was – and the result has been condemnation across political and social spectrums, plus the biggest protests and riots across the United States since 1968 and the assassination of Martin Luther King Jr.

Across the globe, we have seen demonstrations of solidarity and protest under the banner of ‘Black Lives Matter’.

Syrians in Idlib painted a mural dedicated to George Floyd. In Britain, there have been demonstrations in Manchester and London. Outside the gates of Downing Street, protesters chanted: ‘I can’t breathe.’ 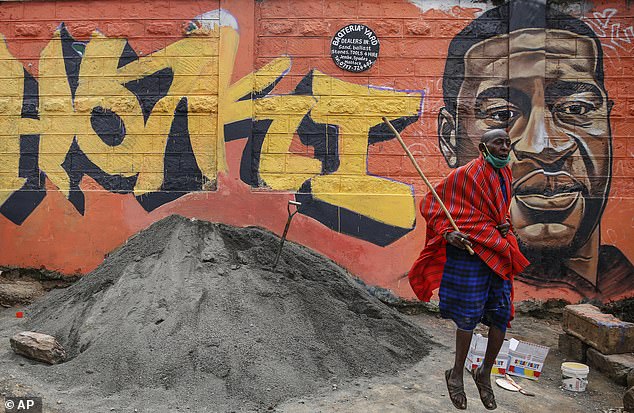 Across the globe, we have seen demonstrations of solidarity and protest under the banner of ‘Black Lives Matter’. Syrians in Idlib painted a mural dedicated to George Floyd (pictured)

It is perfectly understandable that activists seek to make a connection between what is going on in America and how it relates to the situation here.

‘The prejudice that black people in America face is the same prejudice we face here,’ a BLM activist, Shayne, told the BBC.

Spoken-word artist George The Poet told Monday’s Newsnight that ‘there are disturbing parallels between the black British experience and the African-American experience’.

Emily Maitlis rightly challenged him – ‘but you are not putting America and Britain on the same footing… Our police aren’t armed, they don’t have guns, the legacy of slavery is not the same’ – and quickly received criticism on social media from those who felt she was being tone deaf or ‘whitesplaining’ racism to a black man.

I understand why people make the comparison between Britain and America. The US is an intellectual and cultural powerhouse. Anti-racist and black liberation movements here have long taken inspiration from black American music and black political movements in the United States.

There are echoes, too, in the British ‘black experience’, in terms of incarceration rates, for example.

Throughout the 1970s and 1980s the notorious ‘sus laws’ were revived and deployed by police to harass and arrest black people for ‘loitering’ or just walking down the street. In Britain, too, there is a gallery of mainly black men who have died in ‘suspicious circumstances’ after coming into contact with the police.

Sean Rigg, who suffered mental health problems, died outside Brixton police station in 2008 after being ‘restrained’ by police.

Julian Cole, mentioned by George The Poet on Newsnight, was paralysed in 2013 during a scuffle with nightclub doormen and police officers. The officers lied in their statements about what happened during Julian’s arrest and about the severity of his injuries, which included a broken neck – causing a delay which could have stopped him from going into a vegetative state. They were sacked after an inquiry, but not prosecuted. 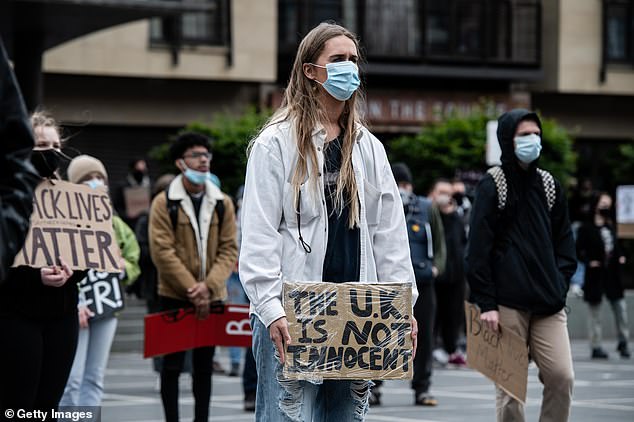 Pictured: A protestor holds a placard saying ‘The UK is not innocent’ during a Socially distanced demonstration taking place at Custom House Square in Belfast

According to the charity Inquest, there have been 1,741 deaths in police custody or following contact with the police in England and Wales since 1990.

If you dig more deeply into the statistics, you discover that use of force is a feature in twice as many deaths among the Black and Minority Ethnic (or BAME) population as it is in other deaths in custody.

Shockingly, not one police officer has been prosecuted , let alone convicted, for deaths of this type since 1969, when two Leeds police officers responsible for the death of David Oluwale – the first black man to die in police custody in the UK – were found guilty of assault.

But they were found not guilty of manslaughter on the direction of the judge, despite verdicts of unlawful killing in the respective coroner’s inquests.

This, too, is a reflection of the United States and a culture of impunity among the police who feel they can do anything and get away with it, knowing that the legal system will give them refuge.

‘It’s an insult to tell black British people that this is an American experience and they shouldn’t draw comparisons,’ said the historian and broadcaster David Olusoga, Professor of Public History at Manchester University.

But he is wrong. While there may be parallels between the black experience in Britain and America, there are also huge differences. Race and racism show themselves in different ways here and in America because we are different societies with different histories.

That’s not to minimise British racism or ‘pat Britain on the back’, to use a cliché common in this debate. It is to accept that, unlike America, Britain does not have a history of slavery or of systematic segregation within its borders.

Yes, the British empire was a leading power in the slave trade throughout the 18th Century, even if it did play a leading part in its eventual abolition.

It is true that there have been attempts to enforce unofficial segregation against black migrants to Britain through racism in employment and housing, most graphically manifested in the ‘No blacks, no Irish, no dogs’ signs outside pubs, clubs and boarding houses until the 1968 Race Relations Act banned them.

Britain, though, simply does not have America’s legacy of segregation. You do not find British neighbourhoods that are wholly black, where people can grow up without encountering a white person or anyone of a different ‘race’ at all. 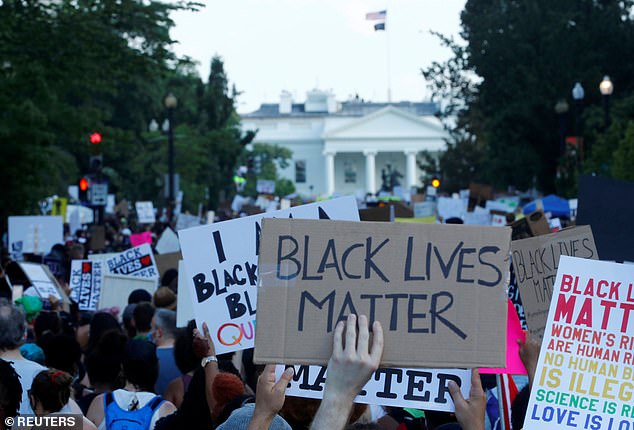 Pictured: Demonstrators hold up signs at the ‘Black Lives Matter Plaza’, near the White House

In America there is a distinct ‘black bourgeoisie’, with its own networks to provide opportunities. There are districts that have the trappings of middle-class life, but are entirely black such as in Harlem, New Orleans, Atlanta and parts of Los Angeles.

There is no equivalent in Britain. While there are individual black families who are among the general middle class, there is no ‘black bourgeoisie’.

Moreover, all police officers in America have a gun. While guns are not necessary for police brutality to take place, they make violence easier to perpetrate and the results are more often fatal.

There is a certain type of black activist who often makes this equation between the British and American experiences. He or she is prone to soliloquise about the ‘fact of their blackness’ – how their ‘blackness’ is a burden.

They speak in the language of ‘trauma’ (so much so that trauma is emptied of any meaning and trivialised), and draw on theories of identity politics manufactured in American universities.

Yet imposing the racial language and ‘grammar’ of the United States on to Britain, a society that is different historically, socially and ethnically, is a form of intellectual imperialism. It obscures the truth about racism in Britain and how it can be combated.

I don’t wish to downplay the situation here, nor do I claim there isn’t a problem with racism and violence. There is. But I want to be mindful of the black American situation, too.

Black people in Britain have not been victims of such pornographic forms of racist violence as public lynching. The police in Britain do not shoot 12-year-old children at point-blank range, as was the case with Tamir Rice, a boy shot dead in Cleveland, Ohio, in 2014 after reports that he was armed. The ‘gun’ Tamir was carrying was found to be a harmless toy.

Racism and police brutality absolutely exist and are serious problems both here and in America. But they must be addressed on their own terms.

To make a like-for-like equation is a form of crass propaganda.

It is potentially inflammatory. And it is untrue.

Related posts:
07/06/2020 Lifestyle Comments Off on You cannot equate racism in America with racism in Britain
Lifestyle News:
ESPN’s Jay Williams slams NBA players for ‘tone-deaf’ bubble complaints
Tim Hortons, Grubhub partner for delivery
Amanda Kloots Held a Memorial for Late Husband Nick Cordero: 'His Spirit Was Definitely There'
Bra fitting expert reveals the secret to discovering your true size
Recent Posts
This website uses cookies to improve your user experience and to provide you with advertisements that are relevant to your interests. By continuing to browse the site you are agreeing to our use of cookies.Ok