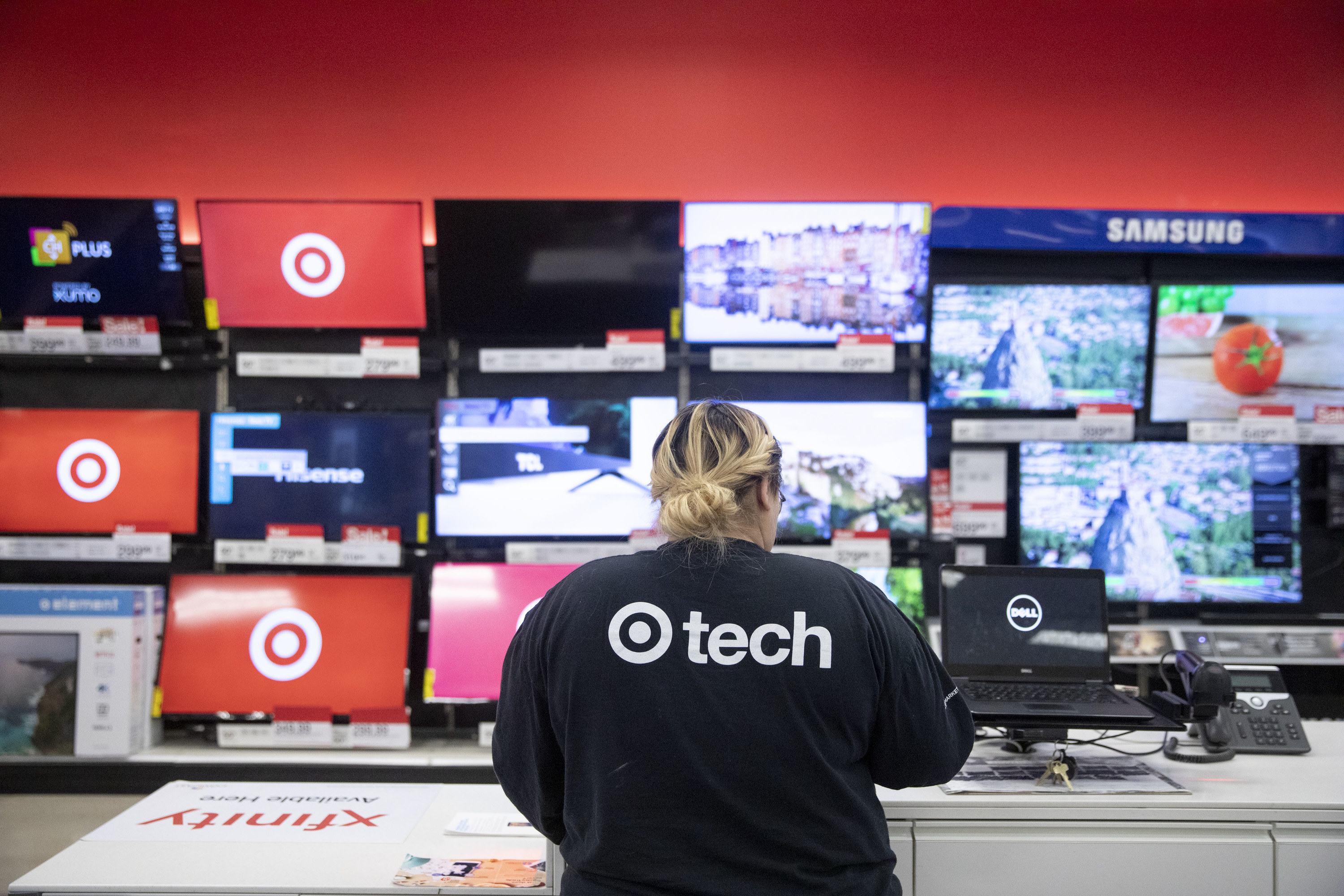 A Target employee stands at a register in front of a display of flatscreen televisions at a Target Corp. store in Chicago, Illinois, on November 16, 2019.

The journalists at BuzzFeed News are proud to bring you trustworthy and relevant reporting about the coronavirus. To help keep this news free, become a member and sign up for our newsletter, Outbreak Today.

Thousands of people work inside Target stores across America under a program known as “Target Tech.” But Target doesn’t employ these workers directly — the retail giant goes through an outsourcing firm, MarketSource, instead. And during the coronavirus pandemic, MarketSource plays by different rules.

While regular Target employees get paid leave for coronavirus, with vulnerable staff able to take up to 30 days as a precaution, “Target Tech” workers who have needed to quarantine have received no pay, and were told they risked losing their jobs if they stayed home for too long. Target Tech workers continue to peddle cell phone plans and troubleshoot misfiring electronics in person, something other leading technology retailers backed away from weeks ago to help stop the spread of the virus. And they have faced pressure from MarketSource bosses to interact with customers and boost sales, internal communications obtained by BuzzFeed News from employees around the country show.

“We are at an advantage as a result of competitors being closed,” a district manager recently wrote to employees. “Let’s not forget what we are here to do – Engage EVERY guest with a mobile conversation EVERY time!”

More than 3,000 Target Tech employees work in over 1,000 Target stores in close contact with customers, many of whom are senior citizens, who run the highest risk of dying from the coronavirus. Several told BuzzFeed News they are afraid to come into work but feel that they have little choice. One employee said that when she tried to extend her unpaid quarantine, her manager told her she had to return to work or resign — even after she provided a doctor’s note saying her life was at risk because of pre-existing health conditions.

MarketSource is owned by Allegis Group, which made $13.4 billion in revenue in 2018.

A MarketSource spokesperson said the health and safety of its employees was its top priority. The company now gives two weeks of paid leave to anyone who tests positive for COVID-19 or lives with someone who has tested positive, the spokesperson said. She did not say when this policy change was made, and one executive and two salespeople told BuzzFeed News they were unaware that the policy existed. Target’s policy does not require a test — an important distinction given testing delays and shortages nationwide.

MarketSource has also “partnered” with Target to allow Target Tech workers to use personal protective equipment set aside for regular employees, the spokesperson said. Target Tech workers experiencing symptoms related to COVID-19 have been told they should stay home. “It is important to note that we do not condone or tolerate any pressure put on employees to report to work if they feel uncomfortable doing so,” she said.

Target, the eighth largest retailer in the U.S., declined to comment except to say its top priority “is the health and safety of our team, guests and partners” and that it regularly updates partners such as MarketSource with information about government guidelines and its own policies pertaining to COVID-19.

While many Americans stay at home, workers at companies selling essential supplies keep coming into work. Retail workers in consumer electronics and technology are considered essential to infrastructure, but Apple, Verizon, TMobile, and Sprint have still shut all or most of their brick and mortar stores to protect customers and staff.

Target Tech staffers’ work can largely be done online, employees told BuzzFeed News. The only exceptions are in-store activations and support visits — but people can activate their phones at home and get items shipped to them directly. Yet Target Tech employees are still required to report for their scheduled shifts, even in areas where MarketSource personnel are under medically-advised quarantine for having flu-like symptoms, he said. District managers within the program continue to make store visits, often spanning areas that cross state lines.

Do you have a story to tell about frontline workers during the coronavirus? We’d love to hear from you. Email [email protected] or reach out via one of our tip line channels.

The MarketSource spokesperson denied employees’ assertions that the in-store services they provide could be accomplished remotely, although she declined to provide any examples of those essential services.

The “ability to connect with others is a critical aspect to many at this time,” the spokesperson said.

While MarketSource has offered some additional support in recent weeks, their policies fall behind Target’s — for example, Target Tech employees were told they’d receive an extra dollar per hour of hazard pay only after Target employees began to receive two dollars per hour. After BuzzFeed News reached out to MarketSource for comment, Target Tech workers learned that this would be increased to $1.50 extra per hour.

Even after Target announced it would pay workers in quarantine in mid-March, MarketSource held firm. “All employees are expected to report to work,” MarketSource Human Resources wrote to one person who posted their email on Twitter on March 18. “If the employee does not report the employee WILL NOT be paid.”

The MarketSource spokesperson said “eligible” employees are allowed to use accrued paid time off if they need to stay home and quarantine. But MarketSource salespeople — the ones worried for their safety — don’t receive any paid time off at all, internal records show. One employee said she didn’t even know that she was allowed to take time off without pay until she told her manager she was worried about COVID-19 because she has asthma, and her manager gave her that option.

“My company has had absolutely nothing in place, and instead in multiple emails directed us to follow Target’s leadership, while we’ve been largely ignored and left out of the loop because we’re not actual Target employees,” she told BuzzFeed News. “I can’t afford to take two weeks off without pay — not that this will be over in two weeks anyway — but I also don’t like my odds at making it if I do get sick, because some idiot isn’t social distancing and is coming out just to upgrade their perfectly fine working phone.”

Another employee, who said she felt ill and was worried about infecting her child, only learned she could self-quarantine after speaking with coworkers and reaching out to regional management to inquire. When she did so, the manager demanded to know who told her that self-quarantine was available, she said, and told her this was a one-time offer.

“He said, ‘Just so you know you can only do this once,” she told BuzzFeed News. “‘Even if you catch COVID-19 you can’t take out again.’”

The employee tried to extend her quarantine with a physician’s note, reviewed by BuzzFeed News, which said, owing to pre-existing health conditions, were she to contract COVID-19, it would likely prove fatal. The manager told her she still had to report to work, she said. Her only other option was to resign, she said he told her while reassuring her that she could collect unemployment. She saw no documentation describing those terms. U.S. Employees who voluntarily quit jobs are not usually able to collect unemployment.

“If I don’t show up tomorrow, I’ll be terminated,” she told BuzzFeed News. “They don’t care about your health.” She is now back at work. Target is now reminding customers to practice social distancing over loudspeakers, she said, and she’s allowed to use a mask and gloves to handle customers’ phones, but customers are still coming closer to her than the recommended six feet.

Documents show that even as the pandemic worsened, MarketSource managers kept up pressure on Target Tech employees to interact with customers and land sales.

“Everyone always forgets how much they use these things without cleaning them!” he wrote.

It feels impossible to practice social distancing for Target Tech, said one employee, because most of her customers are over 50 and need patient and attentive assistance. “It sometimes takes fifteen minutes just to get a guest to understand that just because their new smart phone screen is black doesn’t mean it’s broken or dead,” she said. 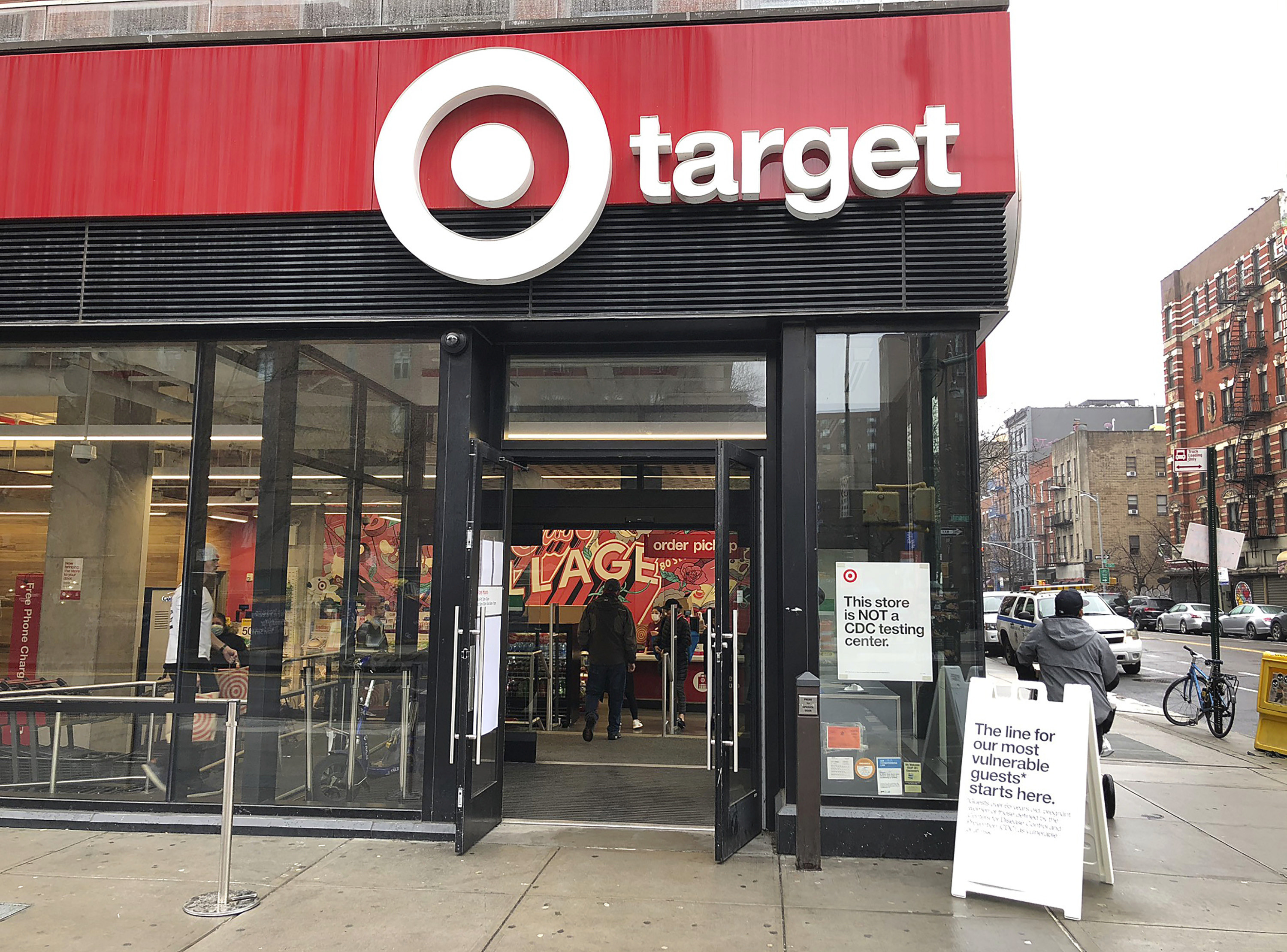 An east village Target store displays a sign in its winow informing customers that they do not provide COVID-19 tests and where a priority line starts for elderly (at risk) and pregnant customers to enter, New York, NY, March 29, 2020.

On March 25, a district manager wrote that after “a tough day yesterday in our rankings,” employees needed to work harder and interact with customers more.

“Engage every guest with a mobile conversation,” he wrote. “If there was ever a time that you have something to talk about with guests, that time is now.”

Similar messages continued throughout the month and into April. “The commitment that we have all made is that NO store will end a week with a zero. This should be even easier since most of our competitors are shut down,” the manager wrote on March 31. “Get in front of EVERY guest shopping for Apple products (Selling AppleCare), any mobile accessories, and MAKE SURE WE ARE NOT BEING OUTSOLD BY TARGET in things we make commission for!”

As of April 7, 42 US states had issued stay-at-home orders. The same day, a senior director at MarketSource’s corporate headquarters messaged all Target Tech employees reminding them that pre-paid phone plans, which can be activated online, were still available for sale and activation in MarketSource-staffed Target Tech locations. “If you are being told otherwise, please contact your district manager and provide specifics around the direction you’re receiving from in store leadership,” he wrote. “MarketSource stores are ‘business as usual’ for all carriers, all brands, and all Prepaid devices.”

The MarketSource spokesperson said the company is “being very responsive during this unprecedented, rapidly evolving situation and not currently operating as ‘business as usual.’”

A MarketSource executive, speaking on condition of anonymity, told BuzzFeed News that Target is the company’s most important client. As a result, MarketSource higher-ups have been reluctant to do anything that might hinder sales, he said. “They’re doing everything possible to keep it going, whatever the cost.”

Related posts:
09/04/2020 Lifestyle Comments Off on They Work Inside Target Stores. They Don’t Get The Same Coronavirus Protections As Target Employees.
Lifestyle News:
How Prince Harry and Meghan Markle Celebrated Their First Fourth of July in America
I went camping on the beach in Texas during the pandemic. Here are 7 things I packed for a cheap, socially-distant getaway, and one thing wished I had with me.
If You Feel Like Your Relationship Is Making You Less Independent, Read This
How ‘Outcry’ Subject Greg Kelley Rebuilt His Life After Being Exonerated
Recent Posts
This website uses cookies to improve your user experience and to provide you with advertisements that are relevant to your interests. By continuing to browse the site you are agreeing to our use of cookies.Ok